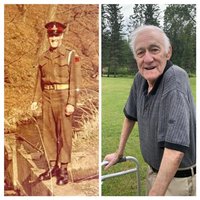 Vincent Joseph Belliveau passed away peacefully at the age of 83 years on September 2, 2019 in Prince Albert, SK. Vincent was born in Bridgetown, Nova Scotia, on July 7, 1936 to parents Gustave and Thelma Belliveau. On October 11, 1960, in New Minas, Nova Scotia, Vincent married the love of his life Elizabeth and they enjoyed 58 years together. To this union, they had two sons and three daughters. Vincent served 21 years with the Canadian Armed Forces (2nd Royal Canadian Horse Artillery). He was stationed with his wife overseas and across Canada, along with their five children, before finally settling in Prince Albert, SK. Vincent was employed at the Saskatchewan Penitentiary for 23 years as a Correctional Officer before retiring happily with his wife Elizabeth. On December 5, 2018, Vincent lost his beloved wife, Elizabeth Belliveau, and not a day since her passing has he not missed her. Vincent loved spending time with family and close friends. He especially loved and adored his grandchildren and great-grandchildren. Vincent had a passion for politics, true crime novels, and NHL hockey. He adored his lifelong military family, Larry and Sandra Mullins, and their children Sean Mullins and Laura “George” Koenig of Calgary, Alberta. To him they were not military family, they were family. Vincent will forever be remembered and deeply missed by his children: Joseph Belliveau (Kelly) and their son Kyle, of Prince Albert, SK; Tom Belliveau (Debbie) and their children Sjorden and Laiken Belliveau of Saskatoon, SK; Joyce Fremont (Terry) and their three daughter Cheryl Mcleish (Duncan), Crystal Fremont, and Christina Fremont, of Nanton, AB; Nancy Elder (Wes) and their children Ashley Harris and Andrew Harris, of Prince Albert, SK; Cindy Ethier (Dean) and their son Michael Ethier of Prince Albert, SK; and his great grandchildren: Austin Fremont, Caleb and Jacob McLeish, and Andrea, Helena, and James Hall. The family would like to take this opportunity to thank the staff at Good Shepherd Villas in Prince Albert, SK for their excellent hospice care and compassion. A special thanks to Veterans Affairs Canada for all their support and services during this difficult time. A private family memorial and prayer service will be held at a later date. Condolences may be sent to the family at www.grays.ca. Funeral arrangements have been entrusted to Gray's Funeral Chapel, (306-922-4729).