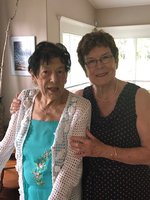 Irene Vivian Dent March 12, 1936 ~ September 3, 2019 Irene’s family are sad to announce her passing on Tuesday, September 3, 2019. She leaves to celebrate her life and mourn her passing, her four children Bruce (Lumpei) of Calgary, Brad (Janet)of Prince Albert, Colleen (Allan) Becker of Kelowna and Randeen (Leon) Durette of Saskatoon. She also leaves her eight grandchildren: Amber-Rose, Crimson, Mitchell, Jordan, Carleigh, Britanny, Dane and Justin and three great grandchildren: Siobhan, Adrienne and Morgan. She will also be sadly missed by her sisters Debbie Salmond, Marva Lubyk, Shirley Gange and her brother Floyd Cochran. Irene was predeceased by her husband Charlie in 2010 and kept his memory alive in all that she did. As the first child of Florence and Joseph Cochran, she remained a big part of her siblings’ families and took every opportunity to celebrate, love and care for both the Cochran and Dent families. For Irene, there was no greater love than her family. Both Irene and Charlie were Prince Albert people all their lives and contributed to our community through their businesses, their leadership in St. Paul’s Presbyterian Church, their participation in community groups and their wide group of friends. Their lovely heritage home at 818 River Street and their cottage at Christopher Lake were sites of many wonderful times not to forget the magnificent gardens they nurtured in both locations. Memorial Service will be held on Tuesday, September 10, 2019 at 2:00 p.m. at Gray’s Funeral Chapel, 575 28th Street West, Prince Albert, SK. Condolences may be sent to the family at www.grays.ca. Funeral arrangements have been entrusted to Gray's Funeral Chapel, (306) 922-4729.