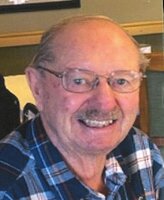 It is with great sadness that the family of Stanley Turner announce his passing on November 5, 2022 in Prince Albert, SK.

On November the 5th, 2022 we said goodbye to our very much-loved dad, grandpa, uncle, and friend Stan Turner just 2 weeks prior to his 91st birthday. Dad was born November 19th, 1931 right here in Prince Albert, SK to John and Lottie Turner, and a little brother to June. Life wasn’t easy as they didn’t have much back in those days and tragedy struck when Lottie died of Cancer when dad was only 7. Dad finished school and went to work for Harradence Hardware store where he remained for 14 years. Cars were his passion, so he switched gears and landed a job at Browne Motor Company where he was a successful salesman until retirement. The business changed names a few times, but dad liked his job and did it well.

Dad married Edna Broten a little spitfire in 1953. Together they had three children, Laurie, Brad, and Wendy. Dad loved the outdoors especially fishing.

Dad absolutely loved his lakefront property at Christopher Lake, SK and it certainly was the best lot on the entire lake. The wonderful wiener roasts, swimming, sun, and sand was heaven on earth. Although we never had running water or electricity until the 80’s they were the best times ever.

Dad and Mom loved to go on their well-deserved winter holidays and Hawaii was their favourite destination at least 28 times. When it was 4 o’clock there was a Rum and Pepsi in hand.

Life has changed for us all and without you dad it will be a struggle. Rest peacefully and make sure you eat what mom tells you to.

As per request no funeral services will be held. Condolences may be sent to the family at www.grays.ca.  Funeral arrangements have been entrusted to Gray's Funeral Chapel,