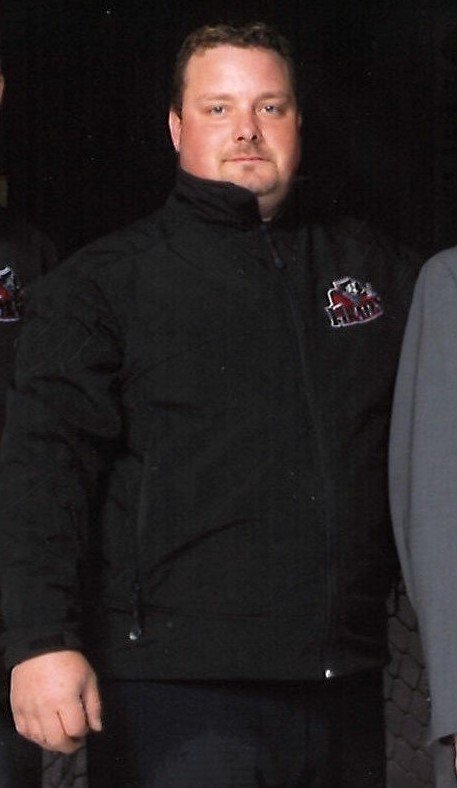 Christopher Michael Dunn “DUNNER” July 15th, 1976 - March 18th, 2020 It is with complete devastation that the family of Chris Dunn announce his untimely and sudden passing on March 18th, 2020 as he was away at work in Stony Rapids, SK.  Chris was born on July 15th, 1976 to parents Lori and Peter Dunn in Melfort, SK.  Chris spent most of his life in Albertville, the eldest of a large family of siblings and foster kids.  Being outdoors was a popular thing with the Dunn crew. You could often see all the kids out on the trampoline or causing chaos one way or another.  He spent a lot of time at the lake with his family enjoying everything from camping to fishing to watersports. That grew his passion of spending countless weekends at Candle Lake, making lifelong friends. He often talked of his lake family and had many “lake parents” who made sure he was well looked after. Chris enjoyed playing competitive hockey in his youth and being with friends. Most of his childhood friendships have continued to this day. Chris graduated school from Meath Park and completed his secondary education in computer programming.  Not one to ever be tied down to a desk, he took up the construction trade, first learning how to build log homes alongside Rob Longlitz at Logwood Industries.  Having framed numerous homes to doing countless renovations far and wide, he hung up his hammer to start a new adventure with Sasktel, whom he was currently employed with.  It was a job he thoroughly enjoyed right to the day of his passing. In 1999, he asked his future wife Courtney out on a date. They married in 2004 and he became stepdad to 2 year old Taylor.  But he was more than a stepdad, he was just Dad. The family welcomed baby Mackenzie in 2006 and completed their family. Or so they thought. In 2016, Chris became the most amazing grandpa to little James Bond.  Chris was the ”go-to” grandpa….what Jamesy wanted, grandpa got. He lived for making that little boy smile. His rough and gruff demeanor became an instant puddle of mush when Jamesy entered the room. As most people know, Chris’ passion was being a hockey coach.  For almost 20 years, he has mentored hundreds of young men. The “Coach Dunner” stories are endless and always full of laughs. The boys will always remember him and his “finger guns”. He was blessed to have countless ex players return to the house for stories, drinks, and job internships. He never hesitated to take on a player who wanted to try their hand at the construction trade.  Whether it was hockey, employment, family issues, or whatever, Chris always had their backs. His hockey family was vast and true. Parents, players, co-coaches were deeply treasured by Chris and remain some of his best friends. After 18 years with bantam and midget “AA” boys, he transitioned with volunteering with the PA Beachcomber Foxes Bantam Girls’ team to be closer to his youngest daughter.  Chris was an avid hunter, having cherished many silent moments of freedom in his tree stand.  He was always most at peace outdoors in nature. He lived for it. He was currently building his cabin at Dore Lake, dreaming of his days off in complete seclusion. Chris could fix anything, a master “jack of all trades”. If he didn’t know the answers, he would accept the challenge of figuring it out. He was incredibly intelligent and completely selfless with sharing his knowledge. His time was always being volunteered to neighbors, family and community... after all, he did become “Mr. Mayor” of Albertville, hoping to make his community safer, stronger and completely independent.  Volunteering didn’t always go as planned…. there’s a good guess that there is a random Chris Dunn tool present in many homes or garages….he wasn’t very good at keeping track of the “loaners”. And if you were really lucky, there was definitely the chance that you’d see the “Chris Dunn flying hammer” trick! In past days, we have seen his uncanny ability to connect with people and leave an everlasting impression on those he met.  His infamous Facebook posts were always a pleasure for those being targeted or anyone who was just following along for the ride!  He had a knack to normalize political matters with everyday common sense and humor. His love, compassion and understanding for everyone he met, will remain with all those who knew him.  We look back and remember the unbelievable role he played with his father's sudden passing in 2003. He took it upon himself as the oldest sibling to become the glue that kept his family together. He was fiercely loyal, loved hard, and had the most amazing work ethic.  His legacy has inspired every one of us to want to be the person he was. His unconditional love for his wife Courtney, daughters Taylor and Mackenzie, and grandson Jamesy will live forever in them and in all those who loved him so dearly. He will be missed by so many.  Chris is survived by his wife Courtney; daughters Taylor Rowe (Tyler Ketzmerick) and Mackenzie; grandson James Bond III; mother Lori Murray(Don); father in law Mark Rowe; brothers Adam Dunn (Amanda) and Josh Dunn (Amy); sisters Nikki Denny (Mike), Ashley Wawro (Brenden), Shanaye Dunn; grandparents Vivian and Lorne Larson; grandmother Sylvia Dunn; several uncles, aunties, nieces and nephews, all special little pieces of his heart.  Chris was predeceased by his father Peter Dunn, brother Justin Dunn, grandfather John Dunn & auntie Cec (Chmura) Dunn. Due to the pandemic, a celebration of his life will be held and announced at a later date.  Condolences may be sent to the family at www.grays.ca. Funeral arrangements have been entrusted to Gray's Funeral Chapel, (306) 922-4729.
To plant a tree in memory of Christopher Dunn, please visit Tribute Store
Services for Christopher Dunn
There are no events scheduled. You can still show your support by planting a tree in memory of Christopher Dunn.
Visit the Tribute Store