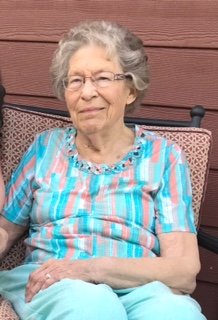 Irene Soderlund August 1, 1928 ~ May 3, 2020 Kind, humble, creative, hospitable, loving, faithful, loyal - these are a few of the words that describe Irene (Manson) Soderlund who left her earthly home on May 3, 2020. For 91 years, she has been sharing this life with her family and friends, and is now rejoicing in heaven. Irene showed her love to all in the gifts and homemade goodness of her many sewing projects, quilting, knitting, crocheting, crafts, baking, and beauty and bounty of her lovely gardens. The family will all remember the smell of her homemade bread, raiding her freezer for all of the home-made goodies, endless coffee or tea and snacks. Irene was an only child herself and was so thrilled to have 12 great grandchildren, 12 grandchildren and 4 daughters. She loved them all, and was happy to spend time sharing her many talents with them. She enjoyed being with her family no matter what they were doing. Irene was a faithful member and Elder of St. Paul ‘s Presbyterian Church for over 70 years, participating in many ministries and committees with a special interest in at Camp Christopher. Irene was born August 1, 1928 in Birch Hills, Saskatchewan to George and Jessie Manson. Her early years were spent on a farm with numerous aunts, uncles, cousins and friends on nearby farms, many of whom remained lifelong friends. Irene attended a one room school, walking the three and a half miles in the summer and going by horse and toboggan in the winter. She was intelligent and quick at her studies and went directly from grade 4 to grade 7! For the start of her grade 8 year she moved with her mother to Weldon, Saskatchewan and graduated from grade 12 with honours at the age of 15. She moved to Prince Albert and attended Business College and then began working at the Bank of Montreal. Irene worked there until just before the birth of her first child where she actually had to do her work hidden behind a large pillar as it was not socially acceptable to continue working while pregnant at that time. After the birth of her first daughter, she began working at The Saskatchewan Timber Board (later known as Saskatchewan Forest Products) where she remained for 35 years. Irene was an early role model for women who chose to work outside of the home. She was the only woman in the neighbourhood who worked full time while raising a family and keeping up with the household chores. Irene and Fred were married in 1951 and lived in Prince Albert their entire lives – first on 6th Street East and later on an acreage on the Shellbrook Highway. Here they raised their 4 daughters and were generous hosts to many friends and relatives. Irene moved back into the city of Prince Albert after her husband of 61 years passed away in 2012. Irene lived independently, cooking all of her own meals, caring for her cat Whim, managing her finances, keeping up with world affairs, and the state of her ever-growing family until February of this year. Irene is survived by her 4 daughters: Joanne (Jerry) Missler of Naicam, SK; Sharon (|Denis) Shynkaruk of Prince Albert, SK; Barbara Cuthbertson of Chilliwack, BC; and Wendy (Pierre) Bourque of Edmonton, AB. Irene was loved and will be missed by her 12 grand children, Lynton (Kami), Chris (Tammy), Ryan (Amanda), Dana (Natalie), Michelle, Riss, Alley, Danielle (Conrad), Rene, Megan (Justin), Jonathan, Suzanna (Dylan), and her 12 great-grand children: Hayden, Kelsey, Jenaya, Maddie, Dallan, Paige, Atticus, Layne, Everlea, Ava, Islette, , and McKenna. Irene was predeceased by her husband of 61 years, Fred, her many sisters-in-laws and brothers-in-laws, and her parents Jessie and George Manson. There are no words to describe how much she will be missed! Donations in Irene’s memory may be directed to either Camp Christopher or TRI4KIDS4CAMP (cheques made out to Presbyterian SYNOD of Saskatchewan), c/o RR 5 Site 15, Comp 33, Prince Albert, Sask. S6V 5R3. Memorial Service to be held and announced at a later date. Condolences may be sent to the family at www.grays.ca. Funeral Arrangements entrusted to Gray’s Funeral Chapel.
To plant a tree in memory of Irene Soderlund, please visit Tribute Store
Services for Irene Soderlund
There are no events scheduled. You can still show your support by planting a tree in memory of Irene Soderlund.
Visit the Tribute Store