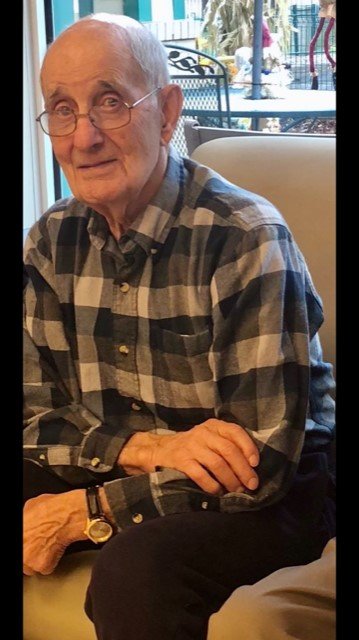 Donat “Don” Leduc September 22, 1930 ~ November 7, 2020 It is with great sadness that the family of Donat “Don” Leduc announce his passing on Saturday, November 7th, 2020 at the age of 90. Dad was born September 22, 1930 on a farm near Albertville, SK. He attended Albertville School until the age of 15 when he left to work on a threshing crew. Dad embraced hard work from a young age, working several winters at sawmill camps near Candle Lake and Montreal Lake and would help his Dad and others farm during the summer and fall. He continued to work hard his entire life, often working late into the day or night to get something done, especially during combining. On July 7, 1955 Dad married the love of his life, Josephine Brassard. Together they raised four children on the family farm just outside Albertville. Dad farmed his entire life but it was not just a job to him it was who he was. He always believed in doing his best and he took great pride and was meticulous in everything he did from growing his crops to the care and maintenance of his farm yard. As a young man Dad enjoyed playing baseball but especially hockey where he was known as a small but fierce competitor. Dad was a kind and generous person who was always there to help out family and neighbours alike with anything they needed. He worked tirelessly for his community whether it was serving on the boards of the Wheat Pool, the Caisse Populaire, the Albertville Co-Op Hall, putting the tiles on the ceiling of the St. James Church, or taking care of the cemetery in his retirement years, Dad was always there to lend a hand. He loved to joke and tease and had a wonderful sense of humor. Dad loved spending time with family and friends, camping, snowmobiling, or just sitting on the deck with a drink and shooting the breeze. Mom and Dad loved to travel and did numerous summer trips to Alberta and BC. As well they traveled to Ontario, Quebec, the USA and even an Alaskan cruise with family. He will be lovingly remembered by his wife of 65 years, Josie, and four children: Richard (Donna) with children Rick (Chantel) Leduc, Melissa (Chad) Thomas; Gilbert; Jackie (Art) with children Carmen (Mark)Doyle, Michelle (Aaron) Rogozinski, Shaun (Andrew) Rogozinski; and Nicole (David) Corriveau with children Bridget (Dan) and Jordan. Seven great grandchildren: Kelsey Doyle, Asiah and Braden Leduc, Michaela, Cannon, Stryker and Isobel Thomas. His brother Lucien Leduc, and numerous nieces and nephews. He was predeceased by his parents Dollard and Dora Leduc, his father and mother-in-law Calixte and Josephine Brassard, his brother Adrien and several brothers and sisters-in-law. A service and internment will be held at a future date. The family would like to extend their heartfelt thanks to the doctors and nurses on the fourth floor of the Victoria Hospital for the excellent care they provided Dad in his last days. We would also like to express our deepest gratitude to the amazing staff at Mont St. Joseph who treated our Dad with dignity and respect. They made his stay there with Mom comfortable and loving as they were never too far apart and always holding hands. In lieu of flowers, donations can be made in Dad’s memory to the Alzheimer Society of Saskatchewan. Condolences may be sent to the family at www.grays.ca. Funeral arrangements have been entrusted to Gray's Funeral Chapel, (306) 922-4729.
To plant a tree in memory of Donat Leduc, please visit Tribute Store
Services for Donat Leduc
There are no events scheduled. You can still show your support by planting a tree in memory of Donat Leduc.
Visit the Tribute Store