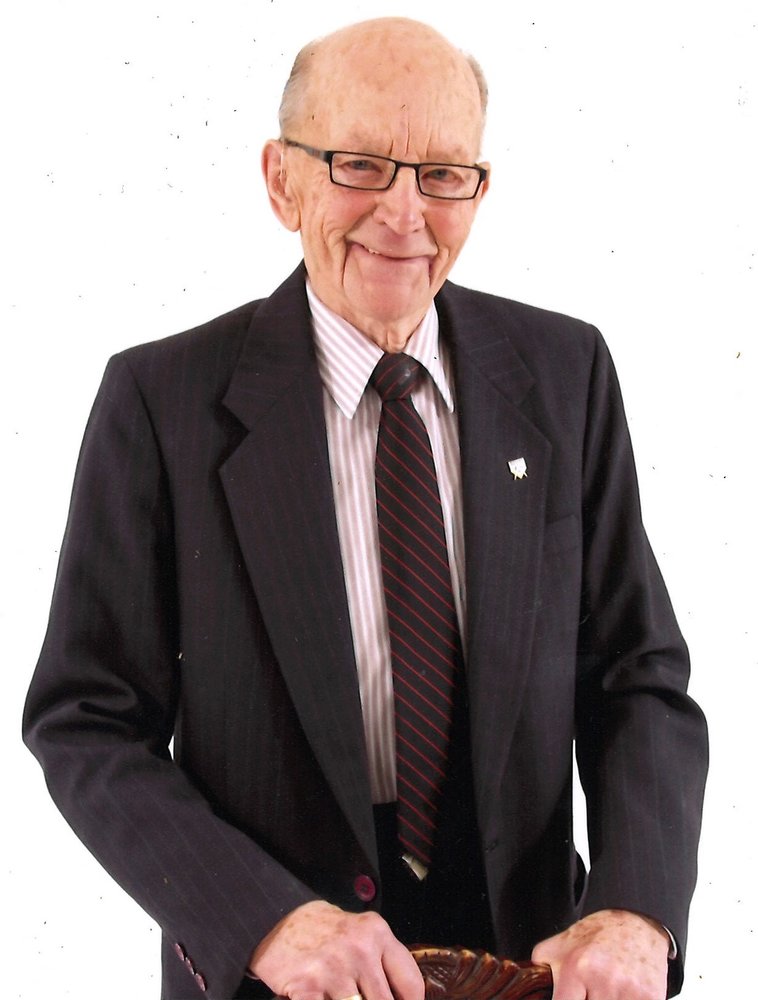 Johnnie was born in Prince Albert, SK but grew up in Kinistino surrounded by grandparents and many aunts, uncles and cousins. Johnnie moved back to Prince Albert in 1940 where he attended Prince Alberta Collegiate Institute. After graduation, he wanted to join the army, but ended up starting his work life at the Prince Albert Airport and then a short stint at Western Grocers where he realized his calling in the food service industry. He was then hired by National Fruit where he became Manager of the Moose Jaw branch and Merchandising Manager in Regina. At his retirement in 1988 he was proudly honoured with a 45-year service award.

While in Prince Albert, Johnnie met and married Vera on August 7th, 1950. Here they had two children, built a cabin at Emma Lake (which remains in the family today) and enjoyed an active social life before moving to Moose Jaw in 1969. Life was good there. Johnnie traveled much less with work and was able to enjoy more time with his family. He raised his family with strong faith and morals. Following in his father’s footsteps, Johnnie became a Mason in the Prince Albert Lodge initially and then dedicated a great deal of time to the St George’s Masonic Lodge in Moose Jaw where he rose in the ranks. He was also a member of the Scottish Rite and Lodge of Perfection. Johnnie has maintained his strong connection to the Masonic Lodge.

What really stood out for his family was that he was incredibly creative and intelligent … definitely a ‘John of all trades”. Even up until just a few years ago he loved working in the garage fixing literally anything or building things for his family. As well, he enriched his family’s life with his love for the cottage at Emma Lake, enjoying many summers there with them and later with his grandchildren. Being adventurous and fun-loving, Johnnie also made time for travel, especially to the US, a tradition his children and grand children have maintained.

Johnnie’s determine attitude towards life’s difficulties, including serious health challenges over the years and recent declining abilities has been a great example to all who knew him. We miss him, but the pillars of faith, love and enjoyment of life that he created remain for us to lean on and build on.

The Family would like to thank Dr. Ramadan, of Moose Jaw for his special attention over the years, Crescent Park Retirement Villa in Moose Jaw and also to the staff, especially Pat Chuey at Good Shepard Home in Prince Albert where Johnnie lived for the past three years.  In lieu of flowers, donations may be made in Johnnie’s name to the Heart & Stroke Foundation.  Services will be live streamed and videotaped. For those that wish to view the service, the live stream link is aspenfilms.ca/grays.