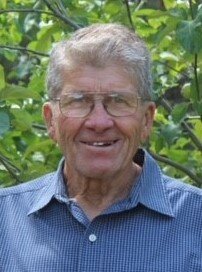 John Bergquist beloved husband to Alice passed away peacefully on September 16, 2021 at Mont St. Joseph Home in Prince Albert, SK at the age of 82 years.

John was born on May 6, 1939 to Joel and Marjorie Bergquist.  He was raised with his two sisters June and Dianne.  John met and married the love of his life Ali May Johnson and together they raised four children.

John was a talented and creative man.  From a young age he loved to work with his hands.  John and his friend Kirby built the first Tandem bike in Prince Albert, this got their picture in the paper.  Over the years John found many other interests, he spent countless hours in his wood working shop designing and building toys and gifts for his children, grandchildren and great grandchildren.  Many people were fortunate enough to be gifted with one of his Diamond Willow canes, walking sticks or treasure boxes.  He loved sharing his passion.

John was an outdoorsman, and enjoyed hunting, fishing, quadding and especially cutting wood.  He could never use all that he cut so many wood boxes were kept full over the years.  Growing up John’s kids have many happy memories that were made, working and playing in nature, as a family.  The work was fun, and they did it all together.

He also enjoyed playing many sports throughout the years, which included ball, hockey, broom ball and golf.  Walking was a mainstay though and he continued to walk almost daily until close to his passing.

John also had a passion for singing and music.  His beautiful voice being his instrument, led him to sing at many weddings and events, where he would also most likely be seen kicking up his heels on the dance floor.

John loved to have a good time, which created many great memories and stories.  He was known for his big personality, his happy and friendly nature endeared him to all who met him.  He was mischievous, a practical joker and a tease.

He loved kids and they loved him; he was a favourite uncle.  John was an instigator, whether it was a wrestling match or chicken fights on the lawn.  John was always in the middle of it.  He was known for his bad haircutting skills, funny faces and noises, silly stories, including “The Hairy Catfish” and other tall tales.

John gathered skills while experiencing many jobs throughout his life.  As a young man he was in the Air Cadets, he once aspired to be a pilot, although life took him in different directions.  In his younger years he worked on the railway in northern Alberta.  This is where he obtained the infamous tattoo.  He worked for many years on his Uncles farms south of Prince Albert, he then went onto Burns Foods, the Prince Albert Penitentiary, bought a small country store in Spruce Home, north of Prince Albert.  He then worked at the Pulp Mill as a Woodroom Supervisor until his retirement at age 59 years.

John was born, raised and started his family in Prince Albert, lived in and around Spruce Home for many years, moved onto Candle Lake and then settled in Garden River area.  John was an active member in all communities he lived in.  He was always the first one to lend a helping hand and lead a crew or work bee.  He loved helping people and had a gift to inspire others to do the same.  He was always involved in his communities, clubs and organizations, and was a volunteer on the Smeaton Search and Rescue.

If asked, John would say that his greatest achievement was his family.  He had Mama Bear qualities when it came to protecting them.  He loved spending time with them and could be seen pacing the driveway in anticipation of their arrival for a visit.  He was so very proud of each and everyone of them.  They meant the world to him.  He was a wonderful husband to Alice for 60 years.  They shared many adventures – fishing, berry picking and just touring around the country.

The family would like to extend their thanks and appreciation to all the staff at Mont St. Joseph Home for the care and compassion John received during the years he lived there.  Also, thanks to the nurses and doctors on the 4th Floor of the Victoria Hospital for their care and compassion during John’s stay.

In lieu of other tributes, those wishing to make a donation in memory of John, please do so to the Alzheimer Society of Saskatchewan, 301-2550 12th Avenue, Regina, SK S4P 3X1 or Mont St. Joseph Home Foundation, 777 28 Street East, Prince Albert, SK S6V 8C2.

Private Family Service will be held.  Condolences may be sent to the family at www.grays.ca.  Funeral arrangements have been entrusted to Gray's Funeral Chapel, (306) 922-4729.

To plant a beautiful memorial tree in memory of John Bergquist, please visit our Tree Store