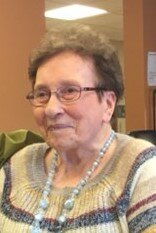 With profound sadness, we announce the passing of Loretta Morris, late of Prince Albert, SK surrounded by her family on September 21, 2021 at the age of 83 years.

Loretta was born on September 22, 1937 in Prince Albert, SK to Dorothea and Stanley Prytula in the Clouston area.

Loretta completed her schooling and education in the Prince Albert area. After she completed her education in college, Mom’s first job was at the jail in Prince Albert. In later years, Mom moved to Saskatoon with her children and to work at the Saskatoon Rehab Centre. Unbeknownst to Mom, her boss at that time was Jack Morris who 20 years later would become her long-time love and husband.

After several years in Saskatoon, Mom took a position at the Allan Blair Memorial Cancer Clinic. While working for a few years in her position, Mom purchased her first home on Queen’s Street in Regina. It was a small house, but Mom worked tirelessly to make it our home.

After many years of working at the Cancer Clinic, Mom upgraded her education with university classes to further her employment, and so began her Provincial Government career.

In 1976, the family moved to La Ronge and began Loretta and Jack Morris’s love story. After Jack’s retirement in 1982, they both purchased a home in Prince Albert. Loretta continued working until her retirement in 1986.

Mom loved to garden, enjoyed her time in the kitchen cooking tasteful food for hours, especially cooking for events, such as Christmas, thanksgiving, birthdays and many other special occasions. Loretta and Jack loved spending their time out on the golf course, and league bowling. Mom believed in giving back to the community by volunteering.  Delivering meals on wheels and books for the blind were two of the many things they gave their time to. Being involved in the Lion’s Club was near and dear to their hearts. Loretta and Jack travelled thousands of miles with the Lion’s Club yearly after Jack became district Governor. They both travelled even more for their Lion’s Club events.

Loretta loved to travel.  Loretta and Jack spent 20+ years wintering in Palm Springs doing what they love, GOLFING!   During the summers, they could be found at their cabin in Waskesiu, and yearly trips to Otter Lake for fishing trips.

Loretta is survived by her:

Jack’s grandchildren, Don and Christa, and their children Carolyn and Nathan Sather

Deliany Sather, and her son Chase;

The family would like to send a heart-felt thank you to all the staff at Mont St Joseph Care Home. You welcomed our parents with open arms and made it their home. We will always remember your kindness, and understanding through-out the years. Thank you to the nurses and care aids who looked after Mom in her final days and hours. Father DJ, your words were comforting to all.  Leah and Jennifer for looking after Mom for 5 years and becoming a good friend to her.

Those wishing to place a memorial donation in lieu of other tributes may do so to the Mont St. Joseph Foundation, 777 28 Street East, Prince Albert, SK S6V 8C2.

It is with great sadness that the family of John “Jack” Morris announced his passing on January 12, 2021 in Prince Albert, SK  https://grays.ca/tribute/details/2382/John-Morris/obituary.html#tribute-start

Commemoration of Loretta and John Morris will be held at 10:00 a.m. on Friday, September 24, 2021 at Holy Trinity Orthodox Church, 684 3 Avene East, Prince Albert, SK with Rev. Father Michael Lomaszkiewicz officiating.  Services will be live streamed and videotaped. If you wish to view the service, the live stream link is www.grays.ca/memorial-videos/.  Interment will be held at South Hill Cemetery Condolences may be sent to the family at www.grays.ca.  Funeral arrangements have been entrusted to Gray's Funeral Chapel, (306) 922-4729.

To send flowers to the family or plant a tree in memory of Loretta Morris, please visit Tribute Store
Friday
24
September