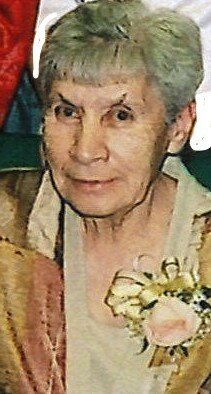 Please share a memory of Marge to include in a keepsake book for family and friends.
View Tribute Book

Our mother, grandmother, sister and friend Marge Halliday left this world on October 29, 2021 at the age of 85 in Prince Albert, SK.

She came from humble beginnings being born on the farm near Duck Lake on November 19, 1935 to Napolean and Emma Sauve.  She joined her 9 siblings on the farm where there were many adventures and stories to be had.  She came to Prince Albert in her teens to help her sister with childcare and got a job at Airways Café.  This new freedom and living as an independent woman led her to meeting the love of her life during one of her shifts.  Marge and Lawrence Halliday were wed on November 28, 1952.  By 1954 they welcomed their first bundle of joy into the world.  This started them on a new journey with many more adventures to come.  In total their family grew to nine children, Marge always enjoyed tending to her garden and always cooked like there was an army coming for supper not just the eleven of them.  Because of this over the years it was well known, everyone was always welcome for a good, satisfying home cooked meal.  Her children had a lot of friends and Marge never turned anyone away whether it be for a meal, a place to sleep or even just a cup of coffee.

Anyone who has ever crossed paths with Marge knew that she was an animal lover.  This is something she passed on to her children, grandchildren and great grandchildren.  She was particularly fond of her dogs, there were many that had the privilege of being spoiled by Marge.  Even in these last few years of life her furry grandchildren would visit her regularly, she called them hers and spoiled them with love and attention.  While out on the farm, she enjoyed tending to the horses, chickens and pigs.  She taught her children and grandchildren about their different personalities, always encouraging them to play and have fun, something she probably picked up on from her childhood on the farm.  Later in life when she no longer kept animals, she did have a fond attachment to all the birds in her area.  She had multiple feeders all around the farm with different feed and spent many hours just watching and enjoying the bird’s company.

Marge and Lawrence spent a lot of time working side by side on the farm and raising their children.  But they did manage to get away and have some real fun.  Their favorite things to do together was blueberry picking.  With Lawrence being a logger and Marge loving animals and the forest, this was a natural fun date activity.  They also followed the rodeo circuit with their children who would compete, and they had many camping and fishing adventures over the years.

In the last few years of her life, Marge enjoyed the friendships made, and the care given by the residents and staff at Nelson Care Home.

There will be a Graveside Service held at 1:00 p.m. on Saturday, November 6, 2021 at South Hill Cemetery, Prince Albert, SK.   In lieu of other tributes, memorial donations may be made to the animal rescue of donor’s choice.

The Family wishes to invite all friends and family but do ask that masks be worn at this Service.