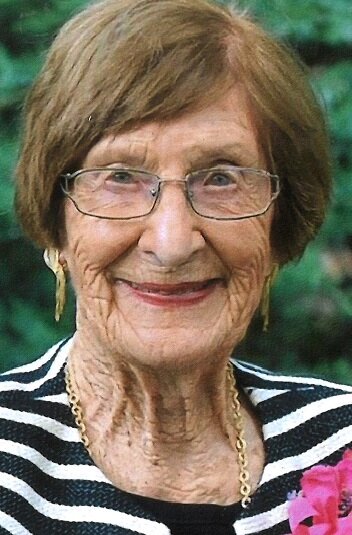 Please share a memory of Rubena to include in a keepsake book for family and friends.
View Tribute Book

Rubena Frances (McCloy) Wenzel, an incredible and loving mother, grandmother and great grandmother, passed peacefully early Sunday morning, December 26th in Prince Albert, SK.  She was 107 years old.  Rubena was born in Colleston on her parent’s farm during a massive snowstorm.  Rubena went to public school in the Colleston district then graduated from PACI at the top of her class in 1933.

She worked in P.A. as a legal secretary where she met Cpl. Charles Ernest (Ernie) Wenzel of the R.C.M.P.  They married in 1937 and were posted to LaRonge, Hudson Bay, Big River and Esterhazy.  They had four children:  Beverley Jean, Donald Ernest, Frances Lynn, and Monelle Rubena.  When Ernie retired from the R.C.M.P. in 1953 the family moved to P.A. where Ernie and Rubena were partners in an insurance adjustment business until they retired in 1974.  Rubena was the first woman in Canada to be a licensed insurance adjuster.

Rubena and Ernie spent many winters as “Snowbirds” in Weslaco, Texas, where they made numerous lifelong friends.  They enjoyed shuffleboard tournaments (Rubena has numerous trophies), card games, barbecues, trips to the Gulf of Mexico beaches, and margaritas in Mexico.  The family joined them in South Padre Island, Texas for annual spring vacations.  Known as incredible dance partners, they loved the weekly dances with all the Canadians in Texas as well as spur-of-the-moment adventures.  In 1967 they hopped on a tiny plane with their friends, the Beatons, in P.A.  Wilf was the pilot, and, without instruments, they flew first to Houston to see Muhammed Ali fight in the Astrodome and then to Mazatlan, Mexico!   Summers were spent at their beloved beach cabin at Emma Lake entertaining grandchildren with wiener roasts, sandcastle building and fishing.

An accomplished athlete, Rubena excelled in tennis, skiing, curling, golfing, shuffleboard and she was a true card shark who won so much we always accused her of cheating which, of course, she would never do!  No one could beat Rubena at Scrabble and she finished Advanced Crossword Puzzles daily in pen.

Rubena’s life was filled with adventures. In LaRonge during the 1930’s she had her own dog team, her only means of travel during the winter.  She travelled to Europe for her 80th birthday where she and her oldest daughter, Bev, spent a month visiting several countries.  Her 100th birthday was celebrated in Oklahoma City with Bev and Roy, son Don and Barb, youngest daughter Monelle, and granddaughters Dani and Ashley.  She also spent her 96th in Hawaii with granddaughter Dani and great granddaughter Emma and for many years she travelled to Barrie, ON and Edmonton, AB to visit family annually.

Rubena was a strong Christian who loved being involved in her Church and during postings with Ernie in several small communities she played the church organ and taught piano lessons.  At Wesley United Church in P.A., she served with the ladies providing food for weddings, funerals and special events, delivered meals to the needy and gladiolas to the elderly.   Rubena was a warm, compassionate lady and her intense loyalty to her family and friends was inspiring.  Her strength was matched by her intellect and kindness.  She touched every life she came into contact with.

We would like to thank Rubena’s special nieces, Elaine McCloy and Connie Walters of P.A., and their husbands, Boyd McCloy and Kent Walters for all the care and kindness they have showered on Rubena for many years;  to her granddaughter, Dani Dickinson of Edmonton, AB who held her Mimi’s hand for her final six days and nights;  and to Pat Chuey and the staff at Good Shepherd Villas in P.A., where Rubena happily lived for the last 7 ½ years, for their exceptional care and love.