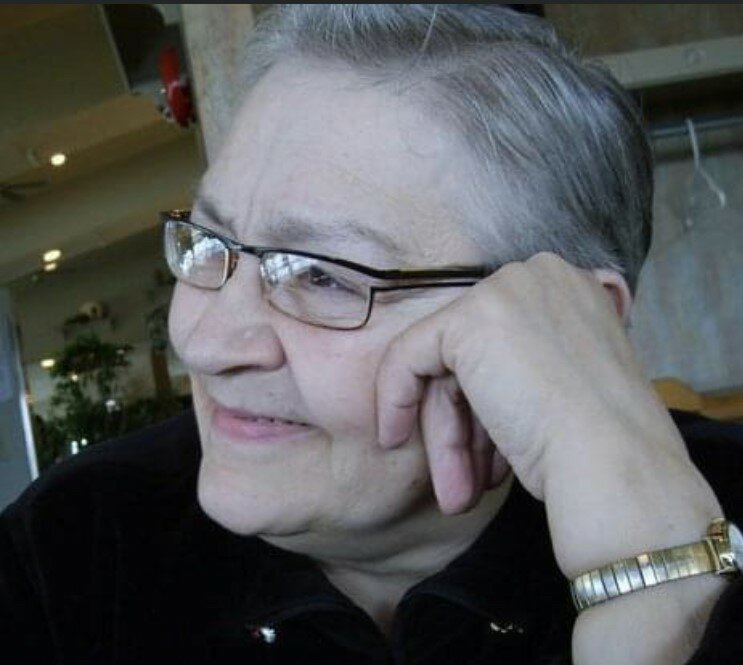 Please share a memory of Eveline to include in a keepsake book for family and friends.
View Tribute Book

January 27, 1943 – January 4, 2022
With sadness, the family announce the passing of Eveline in the afternoon of January 4th, 2022. Eveline was the second child of six born to Wilfrid and Lauraine (Cloutier) Brule on an average winter day at the first Red Cross Outpost Hospital of the British Empire in Paddockwood, Saskatchewan.
Eveline, along with her older sister Marguerite and younger brother Marcel would play together for hours on end either by themselves or with the many cousins that lived close by. The three never had a fight but the girls would always see how tough Marcel was by tackling him. Along came the younger 3 boys, Gerard (Jos), Jean (John), and Paul when the older three were in their preteen years. Eveline, Marguerite, and Marcel would have to keep those three busy and take care of them when their mom passed away at a young age. The girls took piano lessons throughout their younger years and Eveline became quite well known and asked to play at many weddings and funerals. Eveline graduated the same year as Marguerite and her dream was to enter into the army.
As life would have it, that did not happen. On June 6th, 1961, Eveline was married to Rene Lavoie and they remained in the Henribourg/Albertville area farming. To them were born four children; Jacqueline, Arthur, Philippe, and Donald.
Eveline worked hard on the farm and that was also expected of the children who were right alongside. Her gardens would provide for the family and there was enough to feed the whole neighborhood. Neighbor’s would come to the yard to buy milk, cream, and eggs. Supper was always on time and nothing was better than her sweet and sour pork buttons. Many gatherings were held at home and Kaiser would be played till the wee hours of the morning.
After Jacqueline was killed in a car accident, Eveline’s focus and determination to find justice never died. To take her mind off the despair of losing her daughter, she dove into Genealogy in which her book room had binders upon binders of information. The boys would say “there is 2 cords of wood in there”.
Eveline was always joyful, fun-loving, and compassionate. She could find the positivity and brightness in all situations. Memere was nurturing, patient, strong but gentle and calming. She listened with a careful detailed ear and told you what you needed to hear even though you may not have wanted to hear it that way.
Eveline, our mom, memere, sister, and auntie, we are going to miss your compassion, humor, thoughtfulness, and unconditional love.
Eveline is predeceased by her husband Rene, daughter Jacqueline, grand-daughter Jocelynn, her Mom and Dad; Wilfrid and Lauraine, step mom Kay, and brother Marcel.
Until we meet again, mom leaves behind her three sons and families to cherish many memories.
Art and Candy with their blended families: Alyssa (Brett) and their boys, William and Alex; Mathew and his son Chace; Jeremie (Jaslyn); Aaron (Paige) and their daughter Izzy; Geoffrey, Meagan, and Amaya.
Philip with his children: Danielle (Logan), and their children, Kayson, Kinley, Kadynce, and Korbyn; Justin (Kylie) and their son Barrett.
Don and Melinda with their children: Sarah (Kylee), Gabrielle (Simon), Jacques (Kayla), and Aimee.
She also leaves behind her sister, three brothers, and their families, relatives near and far, and the many personal friendships she has made throughout her life.
Eveline carried this special card in her wallet.

Memories
The painful ones are so much more powerful at first. But nothing can take away the good ones, and after a while, they become so strong you can let go of the pain.

A Private Family Service will be held in Summer of 2022.  Condolences may be sent to the family at www.grays.ca.  Funeral arrangements have been entrusted to Myriam Minier, Gray’s Funeral Chapel, (306) 922-4729.

Services for Eveline Lavoie
There are no events scheduled. You can still show your support by sending flowers directly to the family, or planting a memorial tree in memory of Eveline Lavoie.
Visit the Tribute Store