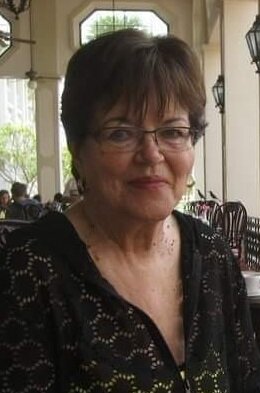 Please share a memory of Deanna to include in a keepsake book for family and friends.
View Tribute Book

It is with great sadness that we announce the passing of Deanna Caroline Palidwar (Thompson) on January 13, 2022 at the Victoria Hospital in Prince Albert, SK.  Deanna was born in Birch Hills, SK and grew up on the family farm with her loving parents Agatha and Severt Thompson and her siblings Dorothy and Wayne. Also living on the family farm was Deanna’s grandmother, with whom she spent a great deal of time.

Deanna is survived by her children Duane Granrude (Marj) of Saskatoon, Sheri Negraiff (Scott) of Calgary and Lori Wishart (Lorne) of Medicine Hat, sister Dorothy Rask (Dennis) of Birch Hills and brother Wayne Thompson (Karon) of Birch Hills, as well as a great many grandchildren and great grandchildren, photos of whom covered her entire refrigerator.

One of Deanna’s passions in life was travelling. She travelled extensively in the US and visited a great many tropical locations in the Caribbean, with Mexico and its sandy beaches being one of her favourites. She also loved polka dancing, gardening, the casino, country music, rodeos and cooking.  Growing up, Deanna loved playing the piano and attributed her musical ability to her father, Severt.

Throughout her later years, Deanna was an avid reader, compiling a collection of hundreds of books which filled her apartment.  Deanna also enjoyed following political and current events happening throughout the world.  She was extremely well informed on many issues of the day.

Deanna remained strong willed and independent throughout her life, living life on her own terms in her apartment in Prince Albert. And while her mobility had declined in recent years as a result of a broken hip, she was fortunately quite internet savvy and spent many hours staying in touch with grandchildren and friends on social media, through Facebook and texting.

Deanna’s family wishes to thank the staff of the Victoria Hospital for the kindness and compassion displayed during her final days, as well as EMS and first responders who cared for Deanna.  We know she will be with us always and is now looking down upon us from what she called “cowboy” Heaven.

Condolences may be sent to the family at www.grays.ca.  Funeral arrangements have been entrusted to Gray’s Funeral Chapel, (306) 922-4729.