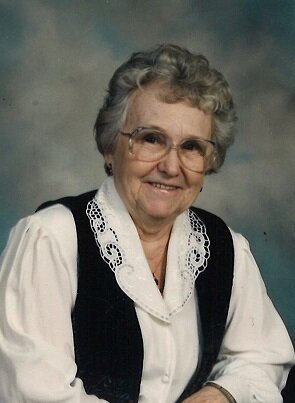 Please share a memory of Mary to include in a keepsake book for family and friends.
View Tribute Book

Mary Lillian (Boyle) Thompson - Lil or Lily as she was called by her St. Louis friends was born in Wakaw, SK on August 21, 1922.

Mom grew up in St. Louis, SK.  She was actually a student of her father’s who taught school at the Gerond School nearby.  The family moved to the Prince Albert area and lived on forty acres in the RM of Buckland that bordered the Prince Albert city limits.  Mom and Dad married on August 9, 1943 and lived in a very small house that was built on my grandparents property.  After having five children and around 1956 they bought a property and built a home in Nordale.  It was the very North West corner of the city.  There they raised eight children.   Mom was very active in the community and helped to raise money to support the community in its endeavours.  Bingos and Fall suppers come to mind as well as Christmas concerts and plays and many other activities that helped to make improvements and entertain the people of the area.  Mom stayed at home and raised her children until the youngest, Shawn, was in kindergarten.  At that time, she got her drivers license and took a class offered in the community to become a teachers-aide.  Mom worked at St. Joseph School and then at Turgeon School until she retired at the age of 65.  Mom loved to paint, knit and garden.  Her lilies were outstanding and many received bulbs to grow their own.  Unfortunately, Alzheimer’s prevented her from continuing and the last 12 years were spent in the Herb Bassett Home.

In lieu of other tributes, donations to the Alzheimer’s Society, 20 Eglinton Ave. W, 16th Floor, Toronto, ON M4R 1K8, made in Mom’s name would be wonderful.

Look inside to read what others have shared
Family and friends are coming together online to create a special keepsake. Every memory left on the online obituary will be automatically included in this book.
View Tribute Book
Services for Mary Thompson
There are no events scheduled. You can still show your support by sending flowers directly to the family, or planting a memorial tree in memory of Mary Thompson.
Visit the Tribute Store