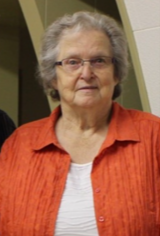 Please share a memory of Wilma to include in a keepsake book for family and friends.
View Tribute Book

Wilma Maxine Hoover (nee McCalmon) was born on October 11, 1934 at Henribourg, Saskatchewan and raised on the family farm, near Paddockwood.  Mom was the third youngest in a family of eight children.  She told stories of her and her brother Jerry riding, sometimes trying to ride, a stubborn little pony named Blackie.  Mom often mentioned going to school, in winter, with the horse and sleigh, relating what fun she and her siblings had, tipping each other out of the sleigh and into the snow.

Mom and Dad met when Dad moved west, looking for a job and adventure.  They were married on October 14, 1953 at Howard Creek. Dad and Mom were blessed with a family of eight children.  Brenda arrived first, followed by five boys:  Jack, Duane, Ronnie, Robert and Randy.  Then there was Susie.  Several years later, their chosen daughter, Shawna, joined the family, making it complete.  Mom was happiest when surrounded by her family.  She loved seeing everyone together and especially enjoyed watching her grandchildren and great-grandchildren play and visit.  Many barbeques were held at the farm and many Christmases were celebrated at the Spruce Home Recreational Center.  Family stopped by frequently to visit Mom/Grandma.  For the past three years, Mom has enjoyed the company of her little lap dog, Cookie.  Cookie was good company and a great listener.  In her last days, Mom was able to be at home, lovingly cared for by her children.  In her Bible, we found a small paper that had the following written on it: “Only the Lord can give us a real sense of peace and security, now and forever.  Put you trust in Him.”

Private Graveside Service will be held at 1:00 p.m. on Monday, February 7, 2022 at Spruce Home Lutheran Cemetery with Pastor Dennis Serfas officiating.  In memory of Wilma, donations may be made to the Victoria Hospital – Palliative Care, 1200 24 Street West Prince Albert, SK.  S6V 5T4.  Condolences may be sent to the family at www.grays.ca.  Funeral arrangements have been entrusted to Gray's Funeral Chapel, (306) 922-4729.