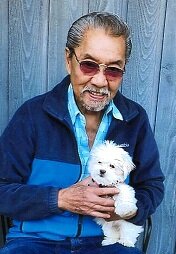 Please share a memory of Felipe to include in a keepsake book for family and friends.
View Tribute Book

Philip Uy at age 84, went home to be with the Lord peacefully surrounded by his loving wife and family on Saturday, February 12, 2022 at the Prince Albert Victoria Hospital. He was born to his parents Chin Chui Uy and Chuy Phun Ong on September 13, 1937 in Manila Philippines. He was predeceased by his parents, his siblings, Victoria, Juanita, Agapito, Mariano and Johnny. Surviving in addition to his wife Elizabeth are his children Glenn, Karen (Travis), Annette, Edwin, Carol (Hector) and Ivan (Connie); his grandchildren Larrissa, Veronica, Joshua, Josiah, Faith, Austin, Abby, Timothy, Ryan, Lexi and Gabby. He studied Business Administration in the University of the East, Manila Philippines. Later, he was employed at the Philippines Thread Mill Corporations in 1960 where he met his wife, Elizabeth Juson. They were married on

May 1, 1963 for 59 years. As a couple they operated a garment factory named “Windy Garments” in 1972 for 16 years. He worked with other businesses as partners as well before an opportunity came to immigrate to Canada in June of 1988. They chose Saskatoon, Saskatchewan to work in the same trade for 14 years before they retired in Prince Albert, Saskatchewan. Philip was a self-taught, gifted and creative individual who was skilled in painting, arts and crafts, woodwork carpentry and cooking. He loved fishing with his friends. He participated in bowling tournaments and have been awarded trophies as a competitive bowler. He was also an avid fan of the NBA basketball games. During his retirement, he looked forward every year to spend the winter months regularly to visit his brothers, sisters and relatives in the Philippines. He was well loved and taken care of by his family and friends in the Philippines. Philip was a man with a few words yet if given an opportunity to speak he is very eloquent. He was a kind and sensitive person towards the needs of others. He showed his generosity not only to his family but also to his friends. He showed his love and care for others with his actions. As the Head of the Uy clan, he was faithful in praying for his family and relatives daily and consistently every night. His faith in God through his prayers was evident in the last years of his life. He gave his whole heart and committed his life to his Saviour Jesus Christ from whom he received unconditional love, grace, forgiveness and eternal life. He expressed gratitude to the Lord for his goodness in his life as he exclaimed in prayer “Hallelujah! Praise the Lord! Thank you, Jesus!