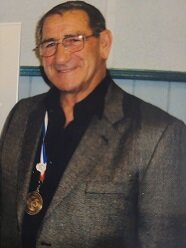 It is with great sadness that the family of John Lehner announce his passing at the Victoria Hospital on February 21, 2022 in Prince Albert, SK.

John is survived by his children, David, Chad and Robyn (Cody), the mother of his children, Debbie Lehner, his grandchildren Paige, Madisyn and Cooper. John will also be missed by his good friend Nick Kalinowski who was a wonderful support to John during his illness. John also enjoyed support, care and friendship for the last two years from the staff and residents of River’s Edge Villa Senior Personal Care Home. The family is grateful to the staff for the excellent care.

John was born at home in Prince Albert, SK to John and Ann Lehner on June 21, 1938. He was one of thirteen children. In fact, there were so many children that there was confusion as to the date of his actual birthday. For years John celebrated his birthday on June 14. It was not until later in life when requesting his birth certificate that he realized his birthday was actually June 21! John loved to visit and chat with people. He could talk about many things but particularly enjoyed conversation about sports!

John was an accomplished athlete enjoying playing hockey with the Kindersley Klippers, the Burns Kings and the Prince Albert Anavets Senior Hockey Team (1961) which was inducted into the Prince Albert Sports Hall of Fame. He played recreational baseball and enjoyed participating in and enjoying many sports. However, his most cherished sport was with his show jumping horses. John was an accomplished equestrian and was passionate about horses. He loved riding and training his many show jumping horses and competed across Western Canada enjoying success at many competitions from small town summer fairs to Spruce Meadows. He was a regular at the Prince Albert Exhibition and, although he had many horses, he is best known for two of his favourite mounts, Coffee-Tyme and Major. John was acknowledged in 1971 by the late RT. Hon. John G. Diefenbaker for his many equestrian accomplishments and his representation of Saskatchewan in the Western Canada summer games. John loved scouting the country-side far and wide for that next “superstar jumper.”  John enjoyed attending sports events and horse shows with his children and supporting them in their chosen endeavours.

In keeping with John’s wishes, cremation has taken place and there will be no service. In lieu of other tributes, donations can be made to Rose Garden Hospice Box 2092, Prince Albert, SK S6V 1E0.

Look inside to read what others have shared
Family and friends are coming together online to create a special keepsake. Every memory left on the online obituary will be automatically included in this book.
View Tribute Book
Services for John Lehner
There are no events scheduled. You can still show your support by sending flowers directly to the family, or planting a memorial tree in memory of John Lehner.
Visit the Tribute Store