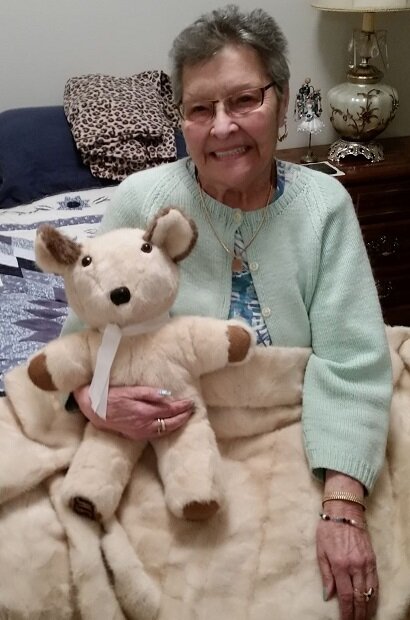 Obituary of May Isabel Wielenga

Please share a memory of May to include in a keepsake book for family and friends.
View Tribute Book

In Loving Memory of

It is with deep sorrow that the family of May Wielenga announce her passing on March 10, 2022 at the age of 84 at the Herb Bassett Long Term Care Home in Prince Albert, SK.

May was born on September 2, 1937 in Teulon, MB.  The first school that May attended was a one-room schoolhouse.  She did not have to walk uphill both ways, however, her sister said the snow drifts must have been six feet high in winter!

In 1963, May, her first husband and daughter, Bonny, moved to Thompson, MB, a northern mining town.  Her first job there was working in the meat department at the Shop Easy grocery store.  Her next job in 1969 was as the first female taxi driver.  Remember, this was a northern mining town where men far outnumbered the women and everyone that wanted a job had one.  I am sure she could have written a book with her stories.  She also lived shorter durations in both Leaf Rapids, MB and Snow Lake, MB.

May and her third husband, Eldon, lived many years at their home in Channing, MB, a small community just outside Flin Flon, MB.  It was a quaint little house on a single street in the bush.  From there they both moved to Saskatoon, SK in 2005 to live in a shared house with her daughter, Bonny.  Eldon passed away from cancer January 2017 and May, then in the early stages of dementia, moved with Bonny to her cabin at Christopher Lake, SK.

In May’s lifetime she was very creative and artistic.  My goodness, she could always think of new ways to change things around in a room.  It never stayed the same very long.  She did plenty of crocheting and also taught herself to paint with oil on canvas watching Bob Ross on TV.  She then switched to painting on rocks; her deer were exceptional!!  When living in Saskatoon, she got into making beaded jewelry and learning to wire wrap.  She rented a table at the local flea market to sell her creations and enjoyed visiting with other vendors and customers.

No matter where May went, she always made long-lasting friendships.  She was also a grateful member of Alcoholics Anonymous and extremely proud of the 25-year medallion she earned in October of 2013.  She loved attending meetings and round-ups, to be there as support and encouragement for others and to keep in touch with old friends.

The last three years of Mom’s life were spent at the Herb Bassett Long Term Care Home in Prince Albert, SK.  Although her dementia was progressing, she never lost her openness to making friends, nor did she lose her spunk.  The last two years since Covid hit made everyone’s lives at the care home more difficult, not only for the residents, but the staff as well.  There need to be improvements made, as well as additional funds and staff made available for our loved ones.  The staff are excellent and caring, however, they are only human and have their physical and mental limits, as well.

May leaves behind her daughter Bonny, granddaughter Melanie (Jordan), one great-granddaughter, and grandson Ché (Diana), her sister Charlotte and family, as well as other relatives and several lifelong friends.

May was predeceased by her husband Eldon Wielenga January 2017, her father and mother Ernest and Bertha Moeller (Majewski), her son-in-law Kevin Latzkowski February 2020 and many other relatives and friends who went before her.

Look inside to read what others have shared
Family and friends are coming together online to create a special keepsake. Every memory left on the online obituary will be automatically included in this book.
View Tribute Book
Services for May Wielenga
There are no events scheduled. You can still show your support by sending flowers directly to the family, or planting a memorial tree in memory of May Wielenga.
Visit the Tribute Store