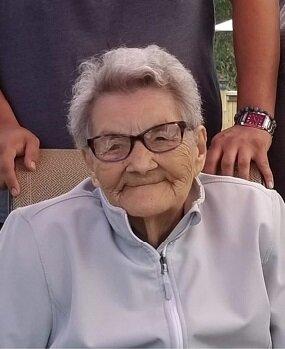 Please share a memory of Cicely to include in a keepsake book for family and friends.
View Tribute Book

It is with great sadness that the family of Cicely Ellen Brass announce her passing on March 12, 2022, in Prince Albert, SK. Cicely was born May 27, 1930, in Prince Albert, SK to Leonard and Princess Bear.  Cicely married Wilfred Brass on June 1, 1955. Cicely was very hardworking, compassionate, and giving. She started her career at North Park Centre in 1966 and continued to be a Care Aid till 1987.  She called Davis, SK home raising her family of ten while working a full-time job. She had a strong love for animals, especially birds. Cicely loved flowers, her lilac tree, and her mansion (her humble abode).  She enjoyed cooking for her family, crocheting and knitting.  She was an active Elder at Muskoday First Nation as well as the oldest Muskoday First Nation Band Member.

Cicely is survived by her children:

Funeral Service will be held at 2:00 p.m on March 16, 2022, at Plaza 88, 888 Central Avenue Prince Albert, SK.  Interment will be held at Muskoday Cemetery.  In memory of Cicely Brass donations may be made to World Vision Canada, 1 World Drive, Mississauga, Ontario L5T 2Y4.  Condolences may be sent to the family at www.grays.ca.  Funeral arrangements have been entrusted to Gray's Funeral Chapel, (306) 922-4729.