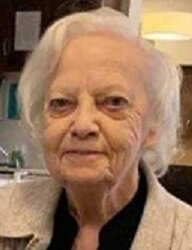 Please share a memory of Doreen to include in a keepsake book for family and friends.
View Tribute Book

It is with deep sorrow and much love the family announce the passing of Doreen Margaret Dean on March 18, 2022 with family at her side.

Doreen was born on January 14, 1941 to Wildrew and Margaret Lang. She grew up on the farm at Shell Lake, attending Edgewater School and Shell Lake School. She moved to Saskatoon to further her education, completing her Nurse’s Aide Certificate.  Then a move to Prince Albert to begin working at the Prince Albert Sanitorium. During this time, she met her husband Oreland and they married on October 13, 1962. Oreland and Doreen owned and operated the Fairholme Hotel from 1969 to 1974. The family returned to Prince Albert in 1975, this is when she began working at Woolco / Wal-Mart. She retired from Wal-Mart with 30 plus years’ service.

Doreen was a hard worker and always put her all into whatever she tackled. Family was very important to her. She hosted many family gatherings, but the delicious Sunday suppers usually followed by a competitive game or visiting are missed the most. Friends were equally as important, which she had many. Family and friends have shared memories of camping, fishing, golfing, curling, games and of course shenanigans. Doreen enjoyed gardening, crossword and jigsaw puzzles, various crafts, trying new recipes and tracing the Lang family history in her spare time.

In lieu of other tributes, hug those you love as time together is precious. The family wishes those wanting to make memorial donations to be made to the Alzheimer Society of Saskatchewan Inc., 301-2550 12th Avenue, Regina, SK S4P 3X1 or to the charity of one’s choice.

Funeral Services will be held at 2:00 p.m. on Thursday, April 7, 2022 at The Church of Jesus Christ of Latter-day Saints, 452 30 Street East, Prince Albert, SK. Services will be live streamed. If you wish to view the service, the live stream https://zoom.us/j/95950655303?pwd=QUNXZVpncmRudWJPTk4yNGYxSmRDdz09

Private Family Interment will be held at a later date.  Condolences may be sent to the family at www.grays.ca.  Funeral arrangements have been entrusted to Gray's Funeral Chapel, (306) 922-4729.