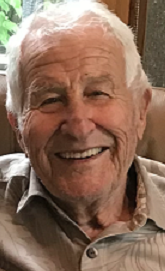 Please share a memory of Ab to include in a keepsake book for family and friends.
View Tribute Book

It is with deep sadness that we announce the passing of our beloved father and loving grandfather Albert Rocco Pellegrini.  Ab was born on December 13, 1930, in Saskatoon, SK to Amalia and Camillo Pellegrini.

Dad grew up in Saskatoon and attended St. Mary’s School and Technical Collegiate. He didn’t have a college education but was self-taught in many areas. Dad had a great work ethic, working hard, taking the initiative, and standing out above the rest. This provided many opportunities for him. As a young man in Saskatoon, Dad worked at the Southerland Park Drive-In managing the restaurant/confection. His strong work ethic was recognized and as a result, he was promoted to work for Theatre Confections a division of Famous Players Theaters and moved to Winnipeg where he met the love of his life, Joyce Crockett, they were married in 1956 and spent 60 beautiful years together before she passed in 2016.

Ab was promoted and transferred to Montreal as regional manager of Theatre Confections for Famous Player’s Theatres.  In 1959, they were blessed with their daughter Joan, and soon after that in 1960 with Nancy.  Dad and Mom enjoyed life in Montreal, but Dad longed for a simpler life.  In 1962 he moved his family back to Saskatchewan and resided in Prince Albert to start a career with his brother George in the furniture business.  Home Furnishings became Modern Home Furniture and lastly Leon’s Furniture franchise.

Dad wanted to fully embrace the simple life of Prince Albert and he and Mom bought a farm just north of the city. While running a furniture business, he also tried his hand at farming, raising chickens, goats and a few pigs, as well as horses, which he loved to ride. Shortly after moving to Prince Albert, Ab and Joyce’s two sons were born, Dean in 1963 and Randy in 1966.

‘The Farm’, as we all affectionally called it, was Dad’s pride and joy and he spent many hours gardening and endlessly maintaining the beautiful yard site. We have so many wonderful memories of the time spent there with our family.  Summers were spent at Emma Lake, later in their life, Mom and Dad bought a cabin at Waskesiu and enjoyed time with their friends, family, and favourite pastime of golf. Dad was actively involved with the Waskesiu Golf Club and supported the community in many ways.

While running Modern Home Furniture, Dad, along with other independent furniture store owners created a volume independent purchasing group called VIP, allowing greater purchasing power for small independent furniture stores. Years later, he left VIP to align the store with the first Leon’s franchise in Western Canada. He eventually sold the business to his sons Dean and Randy. He was passionate about the business and always remained a trusty advisor to the boys and was interested in the daily goings-on.

Mom and Dad travelled extensively and saw many parts of the world. One of the highlights of their travels was visiting Italy where he connected with many of his relatives. Mom and Dad enjoyed spending winters in San Diego and Palm Springs where they met with friends, opened their doors to family and enjoyed many hours of golf.

We are so blessed that Dad lived such a full and active life almost to the day he died.  He loved and valued family life and was the pillar of our family. He will be missed but so fondly remembered and loved for his strength, love, and words of encouragement.  He was incredibly positive and was grateful for all life provided for him in health and family.

Ab will be lovingly remembered by his children:

Ab is also survived by his sister Maria (George) Specht and family, brother Ron (Yvonne) Pellegrini and family, his beloved sister-in-law Joan Winterton and family; as well as many other family members, nieces, nephews, and friends that will remember him fondly.

The family would like to express their gratitude to the Good Shepherd Care Home especially Pat Chuey and the staff of House 3 for the excellent care they provided for Dad.

In lieu of other tributes, donations in Ab’s memory can be made to the Kidney Foundation of Saskatchewan, 2217 Hanselman Court - Ste 11, Saskatoon, SK  S7L 6A8 or the charity of one’s choice.

Memorial Mass will be held at 2:00 p.m. on Friday, May 13, 2022, at the Sacred Heart Cathedral, 1401 4th Avenue West, Prince Albert, SK  Services will be live-streamed and recorded. If you wish to view the service, the live stream link is www.grays.ca/memorial-videos/. Condolences may be sent to the family at www.grays.ca. Funeral arrangements have been entrusted to Gray's Funeral Chapel, (306) 922-4729.