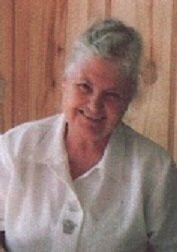 Please share a memory of Sofie to include in a keepsake book for family and friends.
View Tribute Book

Sofie Richter passed away on April 23, 2022 at the age of 92. She fell asleep in her husband’s arms at the farm, where they had lived since arriving in Canada 48 years earlier.

Sofie was born December 1, 1929 on a farm in the small village of Faulenfürst in the Black Forest, Germany. She was the fifth of seven children born into a close-knit, devout and loving family. She learned to work very hard as a young teenager as the girls and little brothers were left to run the farm while her dad and older brothers had to fight in the war. This also taught her to be extremely resourceful and never waste anything.

In 1950 she met the dashing young Uli and they were married four years later. Joe arrived in 1957 and the following year Brigitte completed the little family. Together they operated a small dairy farm and a bed-and-breakfast during summer months. Mom’s sparkling personality and hospitality had many of the guests returning year after year. When Mom and Dad were already in their 40s with teenage children and virtually no knowledge of the English language, they made the brave decision to move to Canada in 1974.

Mom was a passionate gardener, cook and baker. Her famous Black Forest cakes were the highlight of every celebration. She generously shared the abundance of produce from her humongous garden and coffee and cake was instantly served to anyone dropping in at the farm.
She made deep and lasting friendships wherever she lived.

Her unwavering faith in her Lord and Saviour sustained her through many challenges and trials and it was her greatest joy to encourage her family and friends to follow this path.
Nearly 10 years ago Mom’s health declined and she required constant care, which Dad provided in a tireless, loving and most excellent way. As a parting gift to him she peacefully fell asleep in his arms.

We would like to thank Dr. Oleksinski for all the support he provided throughout the years.

Funeral Services will be held at 3:00 p.m. on Monday, May 2, 2022 at Gray’s Funeral Chapel, 575 28 Street West, Prince Albert, SK. with a reception followed by the interment at Deer Park Cemetery, MacDowall, SK. Condolences may be sent to the family at www.grays.ca.  Funeral arrangements have been entrusted to Gray's Funeral Chapel, (306) 922-4729.