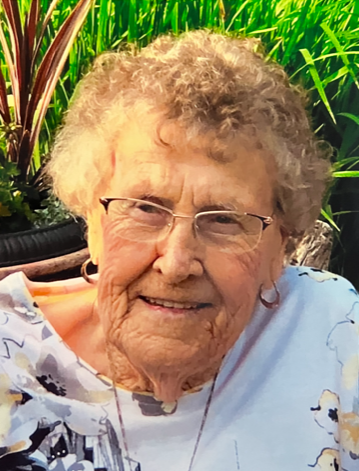 Please share a memory of Kay to include in a keepsake book for family and friends.
View Tribute Book

A much loved and gregarious matriarch left us this week and joined her beloved Harold in heaven. Her spirit and legacy will live on in all who loved her. Kathleen (Kay) Charlotte Manson (nee Halliday) passed away peacefully on August 11, 2022. In the days preceding her passing, she was surrounded by her children, grandchildren, and great-grandchildren, which is exactly how she wanted it to be.

Kathleen was the baby of five children born to Jim and Edna Halliday in Prongua, SK. She was a fall baby, born on September 16, 1932. Her parents had sold their farm and purchased the general store in Prongua, SK. This is where Kay spent her childhood. She loved the outdoors and had lots of friends to play with. Occasionally, she helped with chores in the store alongside her Daddy and sisters Mayme and Homie.

Kay’s mum was an accomplished pianist and earned extra money as a piano teacher. She taught her children piano as well and Kay also became a very accomplished pianist in her own right. Many nights were spent musically in the Manson house - piano, accordion, guitars, and dancing. Kay loved to dance and looked forward to any opportunity to be on the dance floor at a wedding or party. Kay’s two brothers, Bill, and Joe were killed in action in WWII and shortly after, the family sold the store and moved to Battleford, SK. Kay left home after graduation and moved to Prince Albert, SK to train as an RN at the Victoria Union Hospital. She graduated with distinction and had a genuine gift for caring for people. It was in the hospital that she cared for a handsome railroader and became more than his nurse. Kay and Harold were married in 1955. They bought a little house before they welcomed Carol in 1957 and Bob in 1959. They outgrew that house and together built a home on 7th Street where they welcomed two more sons, Calvin in 1965 and David in 1967.

Summers for the Manson family were spent at the lake. Kay was in her happy place with family and friends stopping by. Many lazy beach days were spent together and it was a gathering place for all who loved her most. There were laughs, fires, and stories, and of course, great meals. At Kay’s house, no one ever went hungry.

Before Harold and Kay retired, they built a larger cabin at the lake where they would spend their golden years of retirement. They spent a lot of time on the golf course enjoying regular outings with friends, children, and grandchildren, or on their own. The winters were spent in the rinks watching grandkids hockey games. In later years, nothing gave Kay more pleasure than when she was painting, crafting, or knitting. Her paintings, crafts and knitting were always gifted to the people who were closest to her. Grandchildren came home from the hospital in little knitted bonnets and sweaters. Her Christmas crafts will be treasured and set out by her family for many Christmases to come.

After Harold’s passing in 2012, she kept herself busy painting and baking, and looked forward to golfing every Tuesday morning with the ladies at Marks Nine. She golfed right up until her health would not allow it at 87 years young. She took great pride in her independence and fought hard to keep it. She loved her condo and the special friends she had there. She had many special moments in her lifetime but one huge highlight before she passed was when her grandson Josh brought the Stanley Cup to meet her. She was an avid hockey mom, grandma, and fan, and she truly understood the significance of winning it. To share that moment of pure happiness and pride with Josh and David created a memory for the whole Manson family to cherish.

Celebration of Life will be held at 1:00 p.m. on Friday, August 19, 2022, at Gray’s Funeral Chapel, 575 28 Street West, Prince Albert, SK. Interment will be at Prince Albert Memorial Gardens. In memory of Kay, donations may be made to the Rose Garden Hospice, P.O. Box 2092, Prince Albert, SK or online at https://www.canadahelps.org/en/dn/26521. Services will be live streamed and videotaped. If you wish to view the service, the live stream link is www.grays.ca/memorial-videos/. Condolences may be sent to the family at www.grays.ca. Funeral arrangements have been entrusted to Gray's Funeral Chapel, (306) 922-4729.