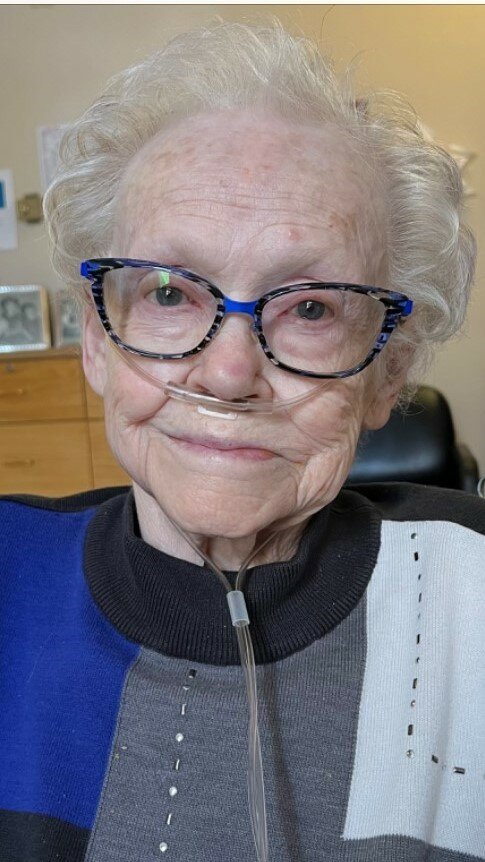 Please share a memory of Betty to include in a keepsake book for family and friends.
View Tribute Book

It is with sadness that the family of Betty Hunt announces her passing on August 20, 2022, at the Dinsmore Health Care Centre at the age of 90. Betty was born on January 26, 1932, in Glenside, Saskatchewan. She was the third of fifteen children born to Elgin and Eva (Shields) Davey. Betty received her education at Glenford Country School and Hawarden. She insisted the most valuable life lessons were learned on the farm alongside her Grandpa Davey. Music was very important in the Davey home and Betty started playing for dances with her Dad when she was 13. She played the piano, drums, and banjo by ear. In 1950 Betty moved to Sovereign, Saskatchewan to work as a telephone operator. This is where she met the love of her life Floyd Hunt. The couple were married in Sovereign on January 19, 1951. This union was blessed with seven children, Mildred (1951), Melvin (1952), Sherry (1953), Terry (1954), Grant (1957), Cindy (1959) and Kirk (1961). Betty was a busy mom with this bunch. She always planted a huge garden, baked bread and buns at least twice a week, did tons of laundry and she baked cookies by the pail full especially at Christmas. She took pride in making clothes for the family and later she made quilts for everyone. Betty loved sports. She played ball as a girl and curled after she was married. She was a huge Toronto Blue Jays fan and would sit in her ball cap and jersey for the games. She loved watching curling and together she and Floyd attended many Briers. A highlight was meeting the Howards and she received an autographed jersey from the Howards for her 90 birthday. The couple bought a fifth wheel trailer and travelled to Halifax and Texas to name a few. Betty never missed a birthday or anniversary with a card and a phone call. Her Christmas cards and letters were usually the first to arrive. While living in Sovereign, Betty worked in the post office, sold Avon, was the secretary for the Sovereign Rural Telephone Company and did janitorial work to help supplement the family income. In 1970 after a holiday in La Ronge, the family came home, packed up, and moved to La Ronge where they worked as assistant managers at the La Ronge Motor Inn. Betty worked at the La Ronge Co-op for a few years. They built a log cabin on Freeman Island, a touch of paradise. Betty retired from Department of Highways before moving to Christopher Lake and later Dinsmore.

A celebration of Life will be held on Friday, September 9, 2022, in the Dinsmore Community Hall, Dinsmore, Saskatchewan at 2 pm. A private family internment will be held on Saturday, September 10, 2022, reuniting Betty and Floyd "together forever." Those wishing may make a donation in Betty's name to the Dinsmore Health Care Centre, Box 219, Dinsmore, Sask. S0L 0T0. Condolences may be sent to the family at www.grays.ca. Funeral arrangements have been entrusted to Gray's Funeral Chapel, (306) 922-4729.