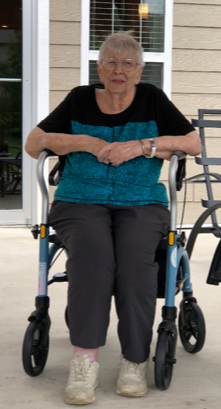 Please share a memory of Mona to include in a keepsake book for family and friends.
View Tribute Book

Mona Marlene Mays passed away quietly on September 17, 2022 with her family by her side after a brief illness.

Mom was born in Portage La Prairie in 1940 to John and Frances Maimy.  The family moved to Saskatoon in 1946.  They settled in the Mayfair area where she attended Mayfair Public School and then Bedford Road High School.  She later got into Nursing and her first job as a Nurse was in North Battleford.  Around this time, she met John (Jack), her soulmate, and they married in 1960 and remained so until Jack’s passing in 2015.  They had two children, James was born later in the year and three years later welcomed their daughter, Shelley.  In the early years of their marriage, they moved around due to Dad’s job with Sask Power, moving to Prince Albert, Melfort and back to Prince Albert where they eventually settled and lived in Hazeldell until 1988 when they retired to Candle Lake.

Mom and Dad enjoyed lake life, camping at Little Bear, or in the cabin at East Trout and later Candle Lake.  One of the things Mom always said was that the family was always blessed to have the best neighbors in the world wherever they lived.  Mom loved knitting and for many years she and Dad owned a store in downtown Prince Albert called the Curio Treasure Chest where they sold children’s clothes and of course, wool.  Tragedy struck the family in 1981 when their only daughter, Shelley, lost her life suddenly in a car accident.  In 1988, Dad was able to retire and they moved to Candle Lake full time and started to travel, spending many winters travelling through the U.S. with their best friends, Linda and Jack Homman.  In 2015, Dad lost one of his many battles with Cancer and Mom moved back into Prince Albert and took up residence at Caleb Village (Points West) where she lived until her passing.

Mom was survived by her son, James; only sister Sylvia (Dale) Constantinoff; grandchildren: Diamond (Jeff) Warnock, Shane (Jodi) Mays and Andrew Mays; as well as numerous nieces and nephews that she always considered as close as her own kids.

The family would like to thank the staff on the 4th floor at the Victoria Hospital for their wonderful care during Mom’s last hours, and also the staff at Caleb Village who were so kind and patient with her over the seven years there, especially Lois.

At Mom’s request, there will be no funeral.  There will be a private service at a later date when Mom and Dad will be interred with Shelley.

Look inside to read what others have shared
Family and friends are coming together online to create a special keepsake. Every memory left on the online obituary will be automatically included in this book.
View Tribute Book
Services for Mona Mays
There are no events scheduled. You can still show your support by sending flowers directly to the family, or planting a memorial tree in memory of Mona Mays.
Visit the Tribute Store