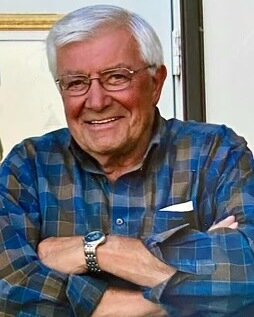 Please share a memory of Arne to include in a keepsake book for family and friends.
View Tribute Book

It is with great sadness that the family of Arne F. Petersen announce his passing on October 2, 2022. He passed peacefully in his sleep at the age of 85 at his cottage at Emma Lake, SK.

Arne left home at a very young age to find his way in life. During those early years he was employed in the oil patch in southeastern Saskatchewan. He then moved on to building roads, throughout rural Saskatchewan, as a heavy equipment operator. This is where his passion and love for operating equipment originated.

After years of moving with the job and having a young family, it was decided to take a position at the MacMillan Bloedel mill in Hudson Bay, SK. This was where Arne’s mechanical genius evolved.

Arne worked as an equipment operator, then a journeyman Millwright, then as a Superintendent of the maintenance staff of the facility.  At this time he also set up a small metal workshop in his garage, building wrought-iron handrails for the Hudson Bay area.

Arne’s mechanical genius led to a long line of innovation, industrial design, and processing patents.  When the opportunity to sell the companies presented itself, he struggled with the decision to let the companies go due to a deep loyalty to his employees.

Prior to selling, a friend asked Arne for advice on constructing a small, 9-hole golf course just outside of the Prince Albert National Park. Having no intention of ever retiring, Arne bought a Cat, rolled up his sleeves … and so the “vision” began!
Arne had many business ventures throughout his life, but none gave him more satisfaction then building his dream of Elk Ridge. This resulted in the development of a 27-hole, world-class golf course, hotel, and conference center as well as 6 property developments.
Arne’s cornerstone of values, which included his commitment and his passion, led him to many accomplishments during his lifetime.  This was evident by the common sight of Arne on a piece of equipment at any time of the day or night.

Arne will be deeply missed by his entire family and many friends. He leaves us with a legacy that few will ever match but all should try to attain.

Please join Arne’s family for a Celebration of Life at 2:00 p.m. on Thursday, October 13, 2022 at The Lodge at Elk Ridge Resort with Pastor Dennis Serfas officiating. A short program will be followed by a social where we can all share our memories of Arne. Services will be live streamed and videotaped. If you wish to view the service, the live stream link is www.grays.ca/memorial-videos/. In lieu of flowers, donations can be made to the Alzheimer Society of Saskatchewan, #301 – 2550 12th Avenue, Regina, SK  S4P 3X1or the Salvation Army, 900 Central Avenue, Prince Albert, SK  S6V 4V3.  Condolences may be sent to the family at www.grays.ca.  Funeral arrangements have been entrusted to Gray's Funeral Chapel, (306) 922-4729.