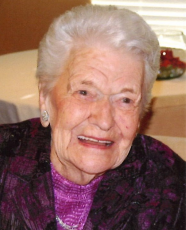 Please share a memory of Donna to include in a keepsake book for family and friends.
View Tribute Book

It is with great sadness that the family of Donna Craig, announce her peaceful passing surrounded by her children and her grandchildren on December 2, 2022.

Donna was born February 18, 1927 to Pearl and Charlie Lloyd in Carnduff Sk. Her family moved to various cities settling in Nipawin, SK where her parents owned the Lloyd’s Department Store. Donna continued in the retail line by taking her office admin course to work at the CB Dept. store. She then, really got involved in the store’s business and married the owner! She liked to joke about that. She was active in the community in many fulfilling roles such as teaching Sunday school at the Wesley United Church; she was active with the churches’ ladies auxiliary with her best friend of 75 years, Betty Dalziel. She was involved in the “Girl Guide” community by being a Brownie leader and hosting the meetings in her basement; she was a member of Eastern Star and Cancer Mount; she was an avid bridge player, she enjoyed curling; she loved cross country skiing and she enjoyed lawn bowling at Waskesiu. Other hobbies/activities were sewing, gardening, canning for the winter and cooking her terrific meals. BUT, what brought her the greatest joy was spending time with her children, grandchildren and their families! Her entire summers were spent at Waskesiu with her children and many friends while her husband Hugh held down the fort at the CB Store and commuted on weekends. Her sister- in law Fern Lloyd was one of Donna’s favorite people throughout their adult lives, Donna was quick to tell others that Fern Lloyd was just like a sister to her. Donna was a trail blazer in her own right as she was always one step ahead of issues that fell on her shoulders. She became the token “grama” to many of her grandchildren’s’ friends at school sporting events. She was even awarded the one and only “Grama of the Year” award at Carlton High School’s sports awards night. She really took great pride in recognizing and cheering on ALL of her special athletes. Donna Craig is survived by her son John (Marnie) Craig, and three daughters, Judie Craig, Donna Lee Dalziel and Sue (Tom) Guidinger; Grandchildren Jeff (Inna) Craig, Meaghan (Chris)McNamee, Lindsay (Mick) Nealon, Jason (Cindy) Dalziel, David (Christie) Dalziel, Dennis (Brenda) Dalziel, Dawn (Trevor) Blyth, Joy (Andreas) Sowah, Craig (Caylee) Guidinger, Leah (Matt) Tyree, Jim (Joanna) Guidinger and 27 great grandchildren who loved their GIGI so very much. She was predeceased by her husband Hugh Craig and their young son James Craig at the age of 15, her son-in-law Don Dalziel, her brother JB Lloyd, her 3 sisters and her mom and dad.

Donna lived a full and loving life and was an outstanding “matriarch” of her family who constantly led by example and always had time for anyone who needed her ear, her hugs or her advice. She will be missed terribly by not only her family but by the entire community.

We would like to thank MAID for helping mom pass peacefully with love and kindness!

Donna’s charities to support in lieu of flowers are Rose Garden Hospice and CNIB.