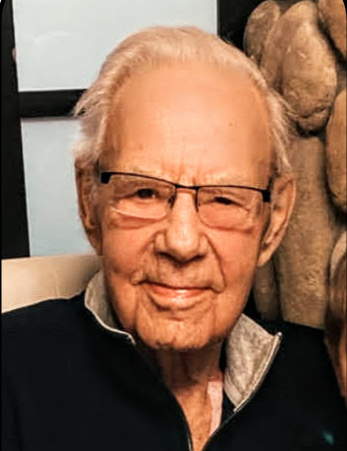 Please share a memory of Rosaire to include in a keepsake book for family and friends.
View Tribute Book

Rosaire (Ross) Phillip Chalifour, passed away peacefully on Wednesday, December 21, 2022 at the age of 93 years.

Rosaire was born in St. Denis, Saskatchewan on October 11, 1929, the first of seven children of Pierre and Helene Chalifour.  He grew up on a small farm outside the Village of Leoville. At age 17 he left the farm to build roads in northern Saskatchewan, which he loved.  By the time he turned 20, he was managing a crew which was known in the area as “the kids crew.”  On July 21,1954 Rosaire married Margaret Rosher. They moved to Vancouver for a period of time where he ran heavy equipment.  They returned to Leoville where they farmed for several years before moving to Gull Lake Saskatchewan with their five children in 1966.   Rosaire and Margaret owned and operated the local Clarendon Hotel for 8 years.  He was very involved in the community serving on the Chamber of Commerce, the Credit Union Board and the Artificial Ice Committee.

Ross was definitely a people person as was evident by the number of friendships he formed wherever he went.  Nobody could tell a joke or a story like Ross.  He also loved dancing, whether it was at a polka fest, or with his daughters and granddaughters in the kitchen. He loved the laughter that went on whenever the family got together.

Ross will always be remembered and loved by his children, Janet (Ray), Jacqueline (Dave), David, Dawn (Peter), and Collette (Barry); his grandchildren Ben (Jess), Kelly (Andrea), Laura (Mark), Colin (Kat), Jennifer (Danny), Sara, Brad, Cody, Nicholas, Jack, Brendan (Danielle), Ashley (Ryan), and Sydney (Mason); and his 13 great grandchildren.  He is also survived by his brothers Roland (Linda), Maurice (Olivette) and Conrad, and his brother-in-law Allan; his partner Ann, and her daughters Jenica, Cheryl, Ellen, and Darlene; and his many nieces and nephews.  Ross was predeceased by his infant son; his parents, Pierre and Helene; sisters Lucille and Aurore; and brother Daniel; great-granddaughter Haddie; sisters-in-law Iona and Carol; and brother-in-law Johnny.

Look inside to read what others have shared
Family and friends are coming together online to create a special keepsake. Every memory left on the online obituary will be automatically included in this book.
View Tribute Book
Services for Rosaire Chalifour
There are no events scheduled. You can still show your support by sending flowers directly to the family, or planting a memorial tree in memory of Rosaire Chalifour.
Visit the Tribute Store