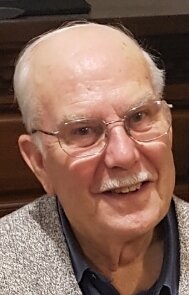 Please share a memory of Louis to include in a keepsake book for family and friends.
View Tribute Book

Peacefully and surrounded by his family and all the love a room could hold, Dad passed away on December 31st at the age of 89 years.

Dad was born February 11th, 1933 in Dauphin, MB. He was the 10th of 11 children born to Alexander and Margaret Lintick.

Dad met the love of his life – Norma (Weatherston), on the beach of Lake Dauphin in the summer of 1952. They married the following year. We were blessed to have Dad stay with us long enough to celebrate their 69th Wedding Anniversary on December 20th. Together they had 3 children – Randy (Audrey); Kelly Minucci (Daniel); and Scott (Marion).

Dad is also survived by 2 sisters, Phyllis Ash of Winnipeg, MB and Grace Winters of Brooks, AB; his sisters-in-law – Joyce Clyde of Dauphin, MB, Lynda Kanderka of Victoria, BC and his brother-in-law, Jerry Weatherston of Victoria, BC, along with numerous nieces and nephews and a multitude of friends.

Dad lost his brother Stan in World War II and he still spoke of his memory of the War Representative coming up the road to the house to deliver that terrible news. In addition, Dad was predeceased by his parents; his in-laws, Roy & Ina Weatherston; 4 brothers – Rod, Ken, Cec and Bruce; 3 sisters – Hazel, Bella and Vi and 11 brothers-in-law/sisters-in-law. But by far, one of the most difficult losses Dad faced, was the loss of his son, Scott, in 2017.

Dad worked for the CN Railroad for 39 years and worked in many communities and towns throughout MB and SK. He retired as a Hostler in 1989.

Dad was an avid horseman. He loved riding and driving his teams. You may have seen him with his buggy in the Prince Albert Exhibition Parade or with little Gypsy hooked up to her cart. In winter you would hear him come with the bells a ringing, as he drove his horse and cutter or big old box sleigh over the roads.

Dad loved music. He liked to play music (the banjo, the fiddle, and the dulcimer), he enjoyed listening to music; but, he loved to dance to music.

He was a very active curler and belonged to many leagues. He attended many CN Bonspiels in the Prairies as well as other community Bonspiels.

In 1975 Dad joined the Kinistino Masonic Lodge #1, in Prince Albert and for 48 years has been an active member in many of the orders of this Fraternity. He was also a member of The Order of The Eastern Star and a Grand Representative to the State of Iowa in Saskatchewan. Dad was also a life member of the Wa Wa Shrine spending countless hours volunteering to help raise money for the Shrine Hospitals. If you ever went to the Shrine Circus or saw the Motor Scooters, Train Engine, or Shriners Drum Core march in summer parades throughout Saskatchewan – then you probably saw Dad.

A Celebration of Dad’s amazing and very full life will be held at a later date.

Memorial Donations may be made to the Shriners Hospital at https://donate.lovetotherescue.org .

The family wishes to send a special thank you to the nurses on the 5th floor at the Victoria Union Hospital for their care and compassion. Funeral arrangements are entrusted to the care of Gray’s Funeral Chapel, (306) 922-4729, Paula Hanson, Funeral Director, and Sarah Naytowhow.

Look inside to read what others have shared
Family and friends are coming together online to create a special keepsake. Every memory left on the online obituary will be automatically included in this book.
View Tribute Book
Services for Louis Lintick
There are no events scheduled. You can still show your support by sending flowers directly to the family, or planting a memorial tree in memory of Louis Lintick.
Visit the Tribute Store